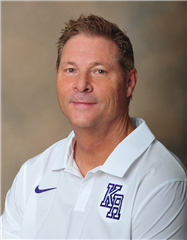 High School Athletic Director
[email protected]
Coach Mike Power begins his third season at King's Ridge Christian School as the new High School Athletic Director and Men's Head Baseball Coach. Before joining the KRCS staff, Coach Power was the Athletic Director for the last seven of his fourteen years at Roswell High School.
Coach Power holds an Educational Specialist degree in Educational Leadership from Lincoln Memorial, a Master's of Education degree in Health and Physical Education, and a Bachelor of Science in Physical Education degree from the State University of New York at Buffalo.

One of Georgia's all-time winningest coaches, Coach Power has accumulated a 525-225 career coaching record, three state championships, and five state championship appearances. He has seen over 100 of his former players compete at the next level, with 37 players signing Division I scholarships. Several of his players have been drafted into professional baseball, while three have played in the major leagues. Coach Power was named state coach of the year four times, and seven of his former teams have been ranked in the national polls. In 2017, Coach Power was inducted into the Georgia Dugout Hall of Fame.
Coach Power also served as the infield/hitting coach for Team USA in 2003-2007 and 2008. The Team captured silver and two bronze medals, and twenty of the players went on to play Major League Baseball. Coach Power has spent the last sixteen years scouting with the Pittsburgh Pirates and currently works with the Minnesota Twins.